At 7:29 am, on June 5, 2013, our sixth child entered this world and officially became a part of our family. Five days later, almost to the minute, our oldest moved out. What happened in between was a flurry of emotions and pomp and circumstance. Literally. That fifth day in June, a Wednesday, was our oldest daughter’s last day of school at Stadium High. She was excited to be finishing this chapter of her life even though she didn’t have definite plans for her future. But before her final day could even begin my wife began having contractions at 4:30 am. She woke me at about 5:00 to inform me of the immediate change of our plans for that day…and if I wanted a shower NOW was the time to take it. After getting dressed I helped her pack the bag for the hospital, alerted my sleeping mom (who had just arrived the previous day from Wisconsin) and escorted my wife to the car for the drive to the hospital. That drive to the hospital was supposed to take about 12 minutes. It took us closer to 30 minutes because I had to pull over every 2-4 minutes so she could get out of the car and endure the next set of contractions. I’m pretty sure her shrieking really freaked out some guy sitting quietly at a bus stop about 20 feet away during one of the stops. Being a doctor herself, my wife didn’t want to go through the “normal” route to Labor & Delivery, instead choosing to park in the doctor’s lot and walk through the basement to the elevators. Several contractions and concerned looks from hospital employees later we found ourselves at the L&D desk. After a few minutes in the waiting room, where we shrieked out another family, we finally got roomed. Baby J didn’t wait very long to make her appearance once we were settled there. In fact, the doctor on call barely made it back to the room to catch her. Even though I’d been blessed to be a part of five other deliveries, I teared up when she was born and thanked God for the health of mother and child. There is something truly beautiful and miraculous about childbirth. Amazingly enough, this was the first and only delivery in which it was only the two of us in the room with our new baby (and medical team, of course). For each of the other five births we had a gallery of family and friends in the delivery room with us. Pretty sure one of them was standing room only. So, there was something particularly tender about sharing this moment with just my wife and our new baby daughter. 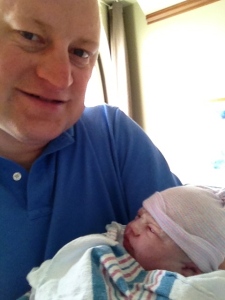 After a few minutes of gazing at this new child, I called home to tell the good news of Baby J’s arrival. I texted a picture of her and our almost three year old was rather unimpressed with the “cheese” on her new baby sister. We assured her that it would wash off and that made her feel a little bit better. The rest of the morning was spent resting in the room, recovering from the early start and the physical exertion of delivering a 10 pound baby! After lunch, my oldest (remember, she was at school) texted me, wondering if I was going to pick her up at 2:15 as usual. Since her school was visible from the hospital, I told her that I could drive the few blocks to get her but that she’d have to come back with me to the room. She was excited to meet her baby sister and pleased with the knowledge that she would be the first sibling to make her acquaintance. Her friend Blanca wasn’t too upset to be along for the meet and greet. By about 4 pm we had been given the clearance to go home, so we slowly made our way back down to the car and packed our baby in for the much shorter ride home.

We were greeted at home by four extremely excited siblings and two equally excited grandmothers. It was certainly fortuitous timing that they both arrived (one from Wisconsin and one from Florida) the previous day in advance of my oldest daughter’s Saturday graduation. It’s mostly a blur for me, but I know that we ate an early dinner before departing for my daughter’s softball game about an hour later. It was kind of odd to be watching her play not even 12 hours after watching my baby make her grand entrance. I’m pretty sure I slept well that first night. Thursday and Friday passed without major events. In order to give my wife and baby quiet time together, I took my toddler and our visitors out for much of each day to see some of the local sights. I felt a little bit guilty, that somehow I was neglecting my duties as a SAHD, but my wife assured me that peace and quiet were much appreciated so that she could nurse and nap, uninterrupted. I guess the biggest event was the gradation dress rehearsal for my oldest at the Tacoma Dome. We were spoiled by the presence of both grandmas, who took over cooking, cleaning and childcare while they were visiting. That allowed us to focus on bonding with our new baby. I believe I bonded with her a few times in the form of her napping on my chest while I napped on the sofa. Even now, she’s still Daddy’s girl. Don’t tell my wife.

Saturday was sunny and warm, perfect weather for an indoor graduation ceremony. We arrived at the venue all dressed up and ready to cheer on our graduate. After finding 10 seats together (no small task) we sat down, unprepared for the emotions that were about to seize us. It was quite surreal for me to watch my oldest walking with her friend into the arena while holding my three day old baby almost literally in the palm of my hand.

The graduate holding her baby sister

It was like two worlds colliding. Both filled with so much hope and excitement yet at such different places in life. At some point during the ceremony I made eye contact with my wife and noticed that she, like me, was quite teary. For me, it was a combination of relief and pride and hope. Relief that our daughter had graduated. It’s no secret that her math class (which was needed for graduation) was a major challenge that wasn’t fully resolved until a few days before graduation. And pride. Pride knowing that our daughter had made it this far and pride in successfully raising and guiding a smart, secure and talented young lady to this point in her life. And hope. Hope for her future, as uncertain as it was a year ago. Hope and a belief that she would successfully find her own way in life. After the graduation ceremony we took lots of pictures and then went out for dinner at our favorite local Mexican restaurant to celebrate our daughter’s accomplishment.

Since both grandmothers were in Washington at the same time and our oldest daughter was still “home”, we were allowed a special baby dedication ceremony at our church on Sunday morning. It was a special opportunity for our church family to meet our tiny bundle of joy and rejoice with us. After church was over we said our goodbyes to Florida Grandma and her husband and returned home for more rest and relaxation for mom and baby. I took my mom (Wisconsin Grandma) and three of our kids to Northwest Trek wildlife park. We had a great time learning about and observing the many animals. Perhaps the highlight of the visit was my almost three year old losing her Croc shoe in the water of the bobcat exhibit. It was retrieved for us by a park ranger and returned with the warning, “This should be sterilized before anyone touches it.” But, I digress. While we were at NW Trek, our graduate was busily gathering her belongings and packing what she was taking with her in some large canvas duffel bags. Her plane was scheduled to leave the next morning. It was getting real. My oldest was moving out. There was no stopping her. No last minute change of heart. I don’t even remember what her “last supper” was but I do know that we finished off that evening with s’mores over the campfire in the backyard fire pit.

We hit the road relatively early on Monday morning to get my oldest daughter and Wisconsin Grandma to SeaTac Airport on time. I was determined to not lose it until she left. I almost made it. As I was unloading the last of her bags on to the curb I could feel the tears start to build. We posed for a couple last pictures together before she headed into her future.

It was not lost on me that I dropped her off at almost the exact same time that her baby sister had been born five days earlier. As I pulled away from the curb my emotions washed over me like a wave crashing on the shore. I pulled off at the end of the drop off area and cried. Just. Cried. Through the tears I had the presence to thank God for allowing me to be her Daddy for those first 18 years. And now, with her leaving the safety of our home, I was releasing her into God’s care. While I know that she’ll always be my little girl and that I’ll always be her daddy, there was such a fierce emotion that was released when the finality of her life at home came to be a reality. After a few minutes I had gained my composure enough to drive home where I held my baby and kissed her head.