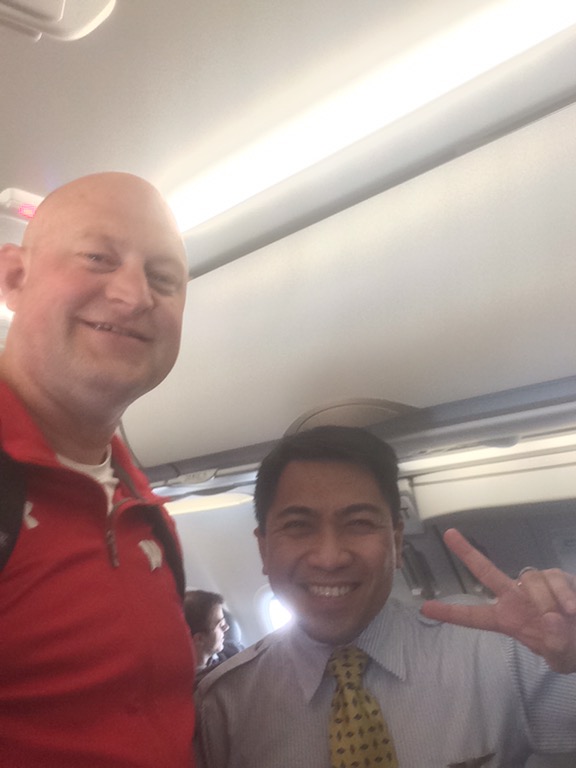 I’m writing this at roughly 35,000 feet above sea level, somewhere above the Rocky Mountains in Colorado. I should be on the ground in Dallas, Texas, already, except my 5 am flight out of Seattle was delayed over two hours, due to some (obviously) unexpected mechanical problems. Even though I’m anxious to reach my final destination of Kansas City to see my 21 year old daughter and I have already missed my noon-departing connecting flight out of Dallas I am having perhaps the most enjoyable flight of my entire life. I’ve blogged recently about making a conscious effort to look at events through a different perspective and today’s flight offered me yet another opportunity to grow my grace muscles.
I left my house at about 2:20 am and drove north on an almost deserted I-5 to a hotel near the SeaTac airport to park my car and take the shuttle to the airport. I was delighted to see that there was no line to get through security. Granted, it was 3:20 in the morning, but, still, I’d expect a bit more activity in a big airport like SeaTac. I got to my gate and settled in to a comfy chair, spreading out my long legs for what I anticipated would be the last time until I disembarked in Dallas. I’m 6’8″ and too much of a cheapskate to pay for extra legroom on domestic flights. Once I got on board the plane I was happy to note that we were at about 60% capacity and, even better, there was no one in the exit row three aisles behind my assigned seat. Anyone who flies knows that exit row seating is the place to be if you’re looking for more leg room. I casually caught the attention of the nearest flight attendant and discreetly asked if I could switch to one of those coveted spots if no one sat there. 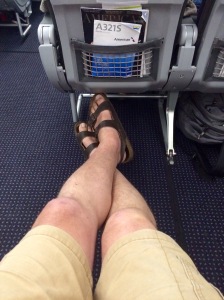 He told me to wait about five minutes more until everyone was on board, but that I was first on his list. My knees were silently praying for a miracle, while my eyes watched every single passenger slowly walk past the exit row seats. Much to my delight, I got one of the seats and, for the first time ever in my life, I had the luxury of being able to fully stretch out my legs while seated on an airplane. As a bonus, there was no one sitting next to me so I had the whole row to myself. Sometimes it’s just the little things in life that can make a 5 am Monday morning cross country flight just a little bit more enjoyable, even on less than three hours of sleep.

I even took to social media to thank American Airlines for the leg room surprise. It’s good to express gratitude. I was mentally prepared for an uneventful flight to Dallas and then on to Kansas City. I may or may not have hummed a few bars of a song I played in jazz band in high school as I stretched out my legs. Goin’ to Kansas City…Kansas City, here I come!
Then, just as our flight attendants were getting their yellow life jacket safety demonstration mojo on the captain interrupted with news that there was a mechanical problem of some sort so we would have a short delay while he powered down and restarted everything. Talk about a mood killer. After a few minutes the captain informed us that we were good to go. So, we taxied out a bit only to come to another stop. At this point the nearest flight attendant, Eric, (the same guy who switched my seats earlier) started talking to me, as his jetseat was a couple of feet away from mine. We talked about a variety of things and he couldn’t have been a nicer guy.
Well, that short delay turned into something longer and before too long we were back at the gate while the mechanics worked their magic on the plane. As the delay stretched from 30 to 45 minutes many people worriedly started approaching the flight attendants, inquiring about their connecting flights. From my vantage point I was able to see and hear Eric and Deborah and Ana patiently address the concerns of each person, assuring them that American Airlines has a program in place that automatically rebooks passengers once a flight is delayed 45 minutes or longer. (I actually received a phone call from American while we were delayed to inform me that I had been rebooked on a later flight.) As the delay passed the hour mark and crept toward 90 minutes the flight crew continued to be as kind and compassionate as possible despite the increasing level of discontent among some passengers. I’ve been on dozens of flights over my life and have seen such professionalism among flight attendants. I decided to tweet about my positive experience and give a specific shout out to both Eric and Deborah as both of them had, at various points during the long delay, taken the time to ask me if I had a connecting flight to catch and to inform me that there would be multiple flights out of Dallas to Kansas City still to come this afternoon. Again, it only took a moment for me to intentionally show my gratitude. 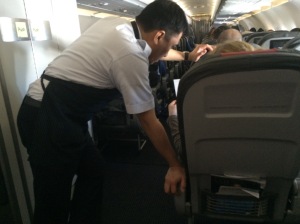 Thankfully, just after our delay passed the two hour mark our pilot, Captain Stewart, announced that the needed paperwork had been completed and that the plane was good to go. I’m pretty sure an audible sigh of relief was heard aboard flight 1228. Eric returned to his safety seat and we resumed talking. He thanked me for being so patient and not complaining. I mentioned that I was actually quite grateful that the mechanical issues had been found while our plane was on the ground instead of while we were already airborne. He laughed a little and I mentioned something about the importance of perspective and that it wasn’t his fault, or the captain’s fault or the mechanic’s fault that there were issues. Besides, it’s a major inconvenience for the flight crew and various support staff as well. Several of the flight crew were returning home after a few days away from their loved ones and would also arriving later than expected. Some of them also had missed their connections (home), just like the rest of us. I’m sure that they were just as frustrated as the rest of us, yet there was no evidence of it based on their body language. They all were happy to assist passengers as quickly as possible and always with a smile. While we were still ascending to our cruising altitude I told Eric that I had tweeted American Airlines about the positive experience during the delay and he joked that I should mention him by name. What’s especially funny is that I had already sent a tweet that praised him specifically, even though he was only joking about me actually doing that. I told him that I’m trying to be more purposeful in expressing my gratitude and was particularly appreciative of his efforts that went above and beyond the call of duty. I hope American recognizes this entire flight crew for their outstanding efforts today. Disclosure: I was in no way compensated or even asked by American Airlines or any of the Flight Crew to write this post. I genuinely appreciate their fine work today in the face of intense customer dissatisfaction. 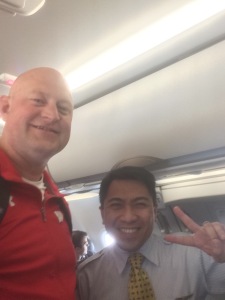