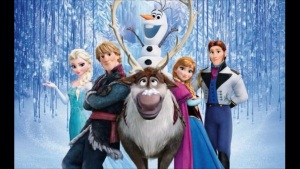 I’m not sure where to begin. Last November, Disney unleashed their latest blockbuster film Frozen. Since that premiere kids and adults everywhere have been captivated by both the fantastic music and  positive message of the movie. My family was no exception. I took two of my kids to the midnight premiere. My mom took four of them to see it over Christmas break. All of them have seen it and love it. If I accidentally say the words “Let It Go” around my kids (including my 9 year old son) they spontaneously break out into song, belting out the lyrics at the top of their lungs. My kids have talked excitedly about pitching in together to buy the movie once it comes out on iTunes.

So, you can imagine my surprise when, earlier this week, I read a blog that claims Frozen is an attempt by the LGBT community to promote their gay agenda to unsuspecting children and their families by trying to normalize the gay lifestyle. This woman goes on and on for a couple of dozen paragraphs about how practically every part of the movie is not what it seems. What? WHAT? Did we see the same movie? I consider myself a reasonably smart person and didn’t get any of that message. And I even watched it with my kids again last night to see for myself if there was some gay undercurrent to the film. I still didn’t see it. While I will admit that I didn’t research this particular author, I did read some of the comments by her readers. Some agreed with her points while others blasted her. After reading her thoughts a second time I came away thinking that this blogger is delusional and hateful. It seems that she has a personal anti-gay agenda because her own daughter is (allegedly, according to commenters) gay and this was meant to put her down as well. Seems especially sad to me in that context. Besides, if her fear is that children are going to be adversely affected by the message of this movie she is wrong. My friend Aaron at Daddy Files wrote a satirical blog in response and I would encourage you to check it out (after you’re done with my blog). But I don’t want to focus any more on what that negative blogger wrote about the movie and instead consider some of the messages other Disney “princess” movies have promoted over the years and how they compare to Frozen.

As a stay at home dad of six (five girls!) for the last 13+ years I’ve seen and heard pretty much every Disney princess movie. Multiple times. To the point that I could probably recite an alarming amount of the dialog and musical lyrics. I’m not 100% certain, but I don’t believe that my daughters have shaped their lifestyles after any of the females in the movies. While maybe not the intent of the writers, I believe that most of the early Disney princess movies followed a pretty similar formula for the female character. Both Snow White and Cinderella feature a young girl whose father dies so she must live with her wicked step-mother who is abusive. Both depend on the “true love” of a prince to save them. The “true love” that comes from knowing someone for one dance (Cinderella) or a few chance musical interactions (Snow White). Princess Aurora in Sleeping Beauty is not much better as she falls in love with Prince Phillip after waltzing with him in the forest. And his kiss of “true love” overcomes the curse of Maleficent, much like the prince’s kiss saves Snow White. In each instance, the girl is powerless to save herself and must depend on the “true love” of a man. That’s not really a life message that I want for my girls in 2014. In addition, I’d like to think that my daughters, should they end of getting married, will take more time to really get to know their potential spouse than one dance. Frozen actually supports this message as Anna is chided a few times for getting engaged to someone she just met that day.

The Little Mermaid. Wow. What a complex movie. First you have the disobedient and rebellious main female character who isn’t satisfied with her life “Under the Sea” and wants to live on land despite the fact that she’s a mermaid. She becomes obsessed with Prince Eric, a guy she’s never met and who doesn’t even know she exists. She even has a treasure trove of human trinkets, complete with a statue of him that she sings to. Seriously. If that doesn’t scream STALKER I’m not sure what will. So, I want my daughter to never be content with what is provided for her at home but instead to desire something or someone else that she doesn’t even know? No thanks. Furthermore, Ariel has to literally change her body to “get” the object of her obsession. She has to trade her voice for a pair of human legs. Again, I would like my daughters to be happy and satisfied with who they are and find someone who would love them for who they are without having to change themselves. Frozen seems to tell us that we should remain true to ourselves and not worry so much about what society expects or wants for us. Let It Go!

Beauty and the Beast is one of my favorite movies for the message that it sends girls to look beyond the hunky guys like Gaston and deeper into someone’s soul like the Beast. Disney left the old formula and ventured a little bit into the notion that a girl who reads and wants to travel could be attractive for those reasons. Interestingly, though, Belle is still quite physically beautiful and is the object of desire for Gaston. Pocahontas and Mulan both have very positive and strong female lead characters and I like them both a lot for that reason. But, like all the other “princess” movies, there is a romantic love interest that must be woven into the story to really draw us in and appeal to the girls. I do appreciate how both Pocahontas and Mulan are very strong characters who remain true to themselves despite familial and cultural pressures to change. In Frozen, Elsa is much a strong character like those two. But the positive twist is the power of the “true-love” of her sister is what changes/saves her, not a romantic interest.

If it seems like I’ve given this a lot of thought it’s because I have. Before I had an iPod or iPhone, we had a VCR/DVD player installed in our minivan to play movies from a flip-down screen, using the radio to play the sound. Which meant, of course, that I was literally a captive audience to the audio for the movies my kids watched during the long drives to visit family that lived in a different state than us. At least four hours each way. That’s a lot of movies. If it’s not obvious from what I wrote, I really enjoyed Frozen and the message it sends to our children. At any rate, I’d love to get your thoughts about what I’ve written here.

**Note: This was originally posted last week but somehow the link stopped working. Hope you enjoyed it (again).

Married 24 years to an amazing woman. Seventeen years as a Stay At Home Dad to six wonderful children ages 4 to 22 years old. I follow Jesus. I grew up in Wisconsin before moving to the Pacific Northwest (Washington state) six years ago. In my free time (wait, what?) I enjoy being active playing (and watching) sports and being outdoors. I've been known to read and love to play old school board games and cards.