Since we haven’t had a TV in our house in nearly four years I don’t see many commercials. Yet, today I learned about the latest Papa Murphy’s ad from my SAHD brothers at the National At Home Dad Network who posted this on their Facebook page today.

Extremely disappointed in Papa Murphy’s for their new “Re-Bold Your Man” ad campaign, which so drastically misses what modern fatherhood is all about, and falls back on such ridiculous concepts of masculinity. Terrible on so many levels.

Playing with your kids and delighting in them doesn’t take away your manhood, it only strengthens it. And what partner wants their kids’ dad LESS engaged with them, and pines for a father more interested in sports than in fully engaging in play? It just makes no sense.

See the ad here, and let us know what you think: http://www.ispot.tv/ad/AL8x/papa-murphys-pizza-re-bold-your-man

I’ve watched the short commercial a few times and my first reaction was that it was cute to see the dad playing with his girls like that. If you’re a dad with daughters, chances are pretty good that at some point you’re going to find yourself getting the full-fairy treatment, much to the delight of your girls. I find the initial portrayal of the dad to be pretty positive, actually. Yet, according to the voice-over this dad is being “de-bolded”. I’m pretty sure that’s Papa Murphy’s euphemistic expression for something more graphic than I’m willing to put in my blog. The basic message to dads and moms is that such an actively engaged and loving father is not to be desired or upheld as the goal. Oh, no no no. You’re not a man if you’re actually enjoying spending time doing something that your daughters want to do. Nope. Instead, this dad needs to be saved from himself. His masculinity needs to be re-bolded by a bold Papa Murphy’s pizza and, of course, football. Seriously, Papa Murphy’s? I think you need a time-out to ponder the larger implications of this seemingly benign commercial.

Please don’t think for a minute that I’m offended by this. This is the type of ridiculousness that we face daily as men who choose care for our children as our full time career. Don’t call me Mr. Mom or Babysitter! I learned a long time ago that getting offended or butt-hurt by the ignorance of others does very little to actually create the positive changes which I desire to see. So, instead of getting angry, let me try to explain this in a way that even my five year old daughter could understand. It is my hope and prayer that my son, if he becomes a dad, and my five daughters, if they become moms, will each take delight in being a parent as much as I do in being their dad. I hope that they will not give in to the pressures of our society to assume certain gender roles. I hope that they will choose the career that is best for their individual situations. 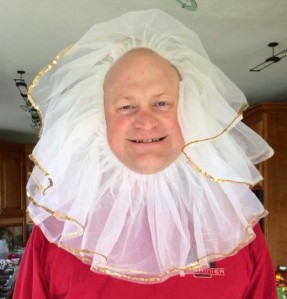 Fifteen years ago, my wife and I decided that it would be best for me to be the primary caregiver as a SAHD while she pursued her advanced degree and established her career. While other men blazed the SAHD trail many years before me, I know that making such an unusual choice was one of the most BOLD things I have ever done. There is no shame in being an actively involved, loving and nurturing father. I love my job more and wouldn’t trade it for anything. I believe that the world needs more dads who are willing to play dress-up with their girls than those who are obsessed with the performance of their sports team. Modern fatherhood and masculinity are not bound by the stereotypes of old. We (ALL dads, not just SAHDs) are more engaged than ever in the lives of our children. Gone are the days of the bumbling and inept dad. We are boldly going where few dads have gone before!

Another beef that I have with this commercial is how it portrays the mom and daughters. First, the mom is in the kitchen. About the only thing missing was an apron. The 1950s are calling…they want their stereotype back! Second, this mom should be supporting and encouraging her husband for showing their daughters that he’s comfortable enough with his own masculinity to play dress-up and get his nails done. He shouldn’t have to be re-bolded because he’s actively engaged with his own children. Are you suggesting that my wife will be happier with me and think I’m more of a manly-man if I ignore my kids and choose instead to focus on sports and food? Clearly, I’ve been doing it all wrong! Third, why couldn’t the daughters be playing catch with their dad and mom, or helping to change the oil, or riding bikes, or anything but the stereotypical “girl” activity of playing dress-up? Please. These gender stereotypes are so lame. I want my children to be free to express themselves without the constraints of our messed up societal expectations for their gender roles. This goes for my girls as well as my boy. Finally, if you’re bent on portraying this stereotypical commercial, at least do it right. No mom is going to serve greasy pizza to “her man” on the sofa without a plate or napkin..and a BEER. And that white carpet is going to get ruined if the girls are painting his toes without a towel under his feet. I’m so disappointed with you, Papa Murphy’s; I know that you can do better.

In the end, I’m not looking for an apology from Papa Murphy’s. After all, I’m not the one that’s truly being hurt by this ill-conceived commercial. This is hurting all of our families by reinforcing outdated gender roles. I would love to work with the ad people at Papa Murphy’s to create something that truly promoted family values that didn’t lean so heavily on old gender stereotypes. Until such a replacement ad is launched, there will be no Love at 425*. Instead, it’s more like Feel the Burn at 425*.