There are few phrases that annoy me as much as when one of my kids sings/says “sharing is caring” to a sibling in an attempt to get something from the other. It’s often related to candy or a toy. While I like the sentiment of the phrase, when my kids use it in such an improper context it grinds me a little bit. Makes me think that maybe I’m not really getting through to them about what it really means. So, I was really thankful that we’ve had the opportunity to host three different parties at our house over the last eight days. Not only was it a good excuse to get the house tidied and picked up, but, more importantly, it was an opportunity for our entire family to reach out and practice the concept of “sharing is caring” in a real and meaningful way.

The first party was a “team bonding” taco bar for my daughter’s JV Water Polo team. We had about 15-20 girls over for several hours. My wife had planned on taking our younger four kids out of the house but she got caught up at work for an extra hour so the party was in full swing by the time she arrived home. And our kids were already helping themselves to the plentiful taco fixings. Even though our house wasn’t immaculate it appeared to make no difference to our guests. They mingled and ate and bonded while watching Frozen together. There was one girl who had never seen the movie until that evening. Can you imagine? The rest of the girls belted out the songs…and I’m pretty sure my three year old was among the loudest and most excited! What struck me was how the girls were so dependent on their phones. Almost every single one of them was texting and/or snapchatting. The evening was concluded with a rousing game of Apples to Apples and the Mama Mia sing-along version. Even though it was a lot of work (especially on my part) to prepare our house for the party I was glad to be the host. Not that I’m controlling, but I like knowing that my daughter is safe and that there’s nothing bad going on.

That’s us. Complete with crazy faces from two kids.

The second gathering was for Easter dinner. I had invited three friends from church who I knew from volunteering with the middle school youth group. All three are in their early 20s and live too far from their families to make it back for Easter dinner. When I brought up the idea to invite them for dinner to my wife she was supportive but a little leery about my ability to get the house cleaned up and food prepared for our guests. I assured her that I could enlist the help of our kids, since they were on Spring Break that week. It certainly helped that the house was already on the neater side from the water polo party a few days prior. When Sam, Tasia and Terrell arrived at our house after church on Easter Sunday my kids excitedly ushered them in, showing off their freshly-dyed eggs and the chickens that we keep in our backyard. A short while later we all sat down for dinner and enjoyed a tasty dinner of honey-baked ham, cheesy hashbrowns, steamed carrots, strawberry pecan salad, apple pie and apple crisp. We shared a lot of laughter and some of our own memories of family traditions from Easter celebrations. Since we had been blessed with a spectacularly sunny and warm (for Pacific Northwest, about 65º) day we spent the rest of the afternoon doing a variety of activities inside and outside of the house. One of our family’s annual Easter traditions is a clue-finding hunt that ultimately leads the kids to their Easter baskets that are overflowing with goodies. Amazingly enough, the Easter Bunny brought baskets for our guests as well. We managed to play some basketball and bocce ball for a while before returning inside to serve up some tacos. (Yay for left-overs from the water polo party. I seriously over-estimated how much taco meat the girls would consume.) What was most meaningful for me was the genuine gratitude expressed by each of our guests for including them in our plans. My wife even suggested that we start hosting similar events on a more regular basis. It was so rewarding to watch all of the “kids” – ours and our guests – playing together. Sam played basketball with my 9 year old son for a while, teaching him some skills that he was able to put into practice right away. Terrell helped my 3 year old build her new (from the Easter Bunny) Lego house. Tasia seemed to effortlessly become the “big sister” to my older girls as they were hanging out and talking and braiding hair. It was a mellow and fun “family” afternoon and evening. A perfectly low-key and low-stress time of togetherness.

Checking out the goodies in the Easter Baskets 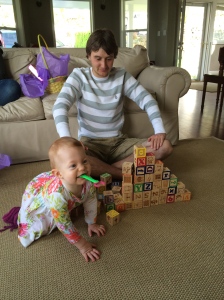 Playing hoops in the backyard.

The last “party” was Friday evening when one of my wife’s co-workers brought her two kids over for dinner. We had them over a few months ago but this time her husband wasn’t along as he was recently deployed through the military. It was an opportunity for her young kids to hang out while giving my wife and her friend a chance to hang out and catch up. Next time I’m going to tell them that they’re not allowed to talk about work-related stuff after the first 10 minutes. I’m pretty sure that we’re going to be seeing a lot of them over the next few months as our kids seemed to hit it off pretty well. Again, the chickens were a pretty big draw and the kids had fun feeding some of the chicks. And I have the utmost respect for all of the military families that keep on living while their loved ones are serving elsewhere. Sharing our home and food with this family is certainly one way that we can show them and our own kids how much we care.

While my house is never going to be Martha Stewart quality and what I serve likely won’t be featured in any magazines, I do enjoy sharing our home with others. I hope that we can, as parents and as a family, start a tradition of hospitality with our friends and neighbors by having them over on a more consistent basis. Maybe I’ll even resurrect the tradition that we had in my family growing up…inviting teachers over for dinner! Yikes!